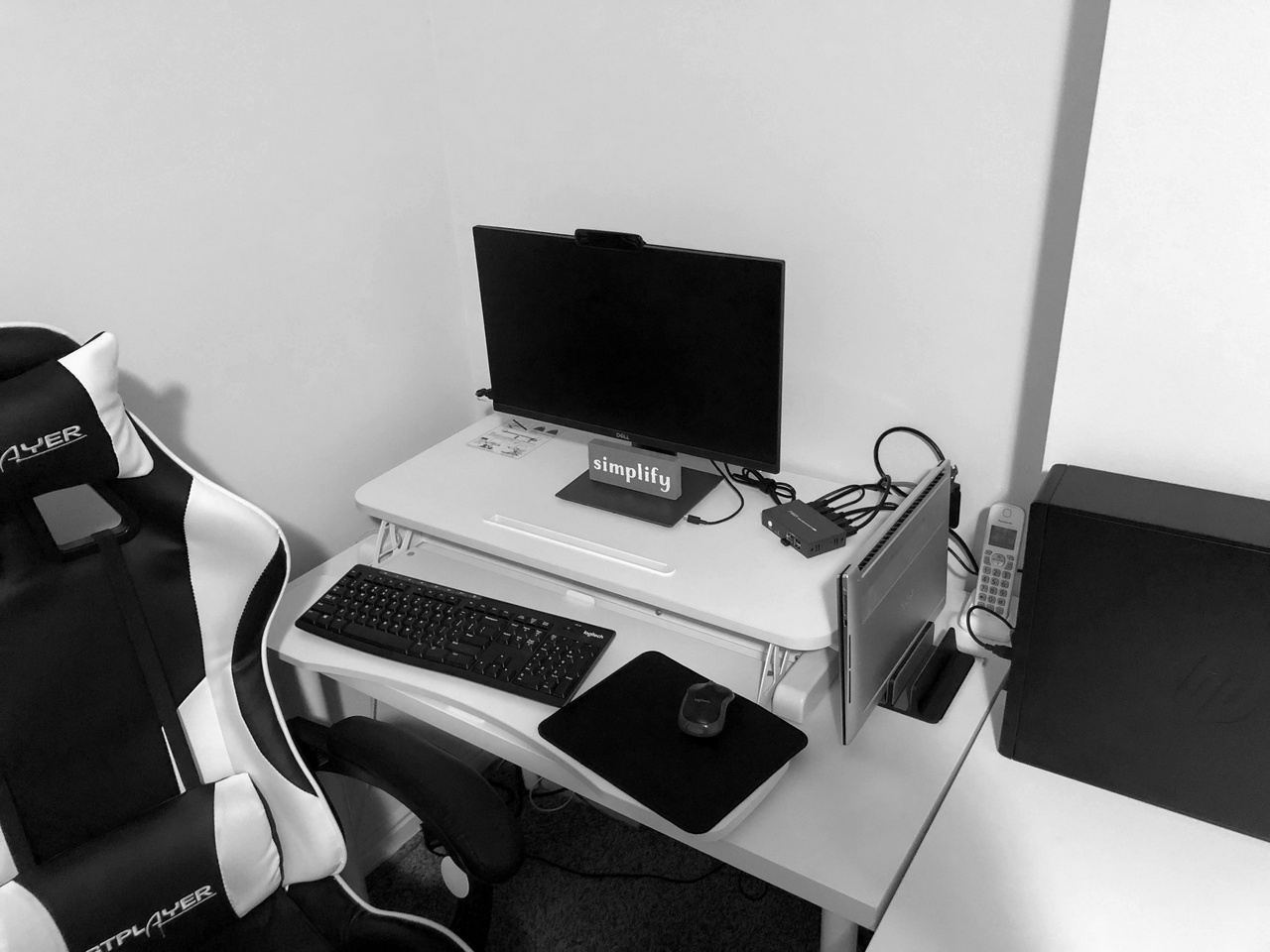 When it comes to room, desk, and equipment configurations for my home office, I like to change things around. A lot.

Lately I've been feeling like my desk was too cluttered with separate monitors, keyboards, and mice for my work and personal computers. Then I remembered that I had a KVM (keyboard, video, mouse) switch and decided to bust it out again and see about decluttering and consolidating things.

So after a revamp, here's my setup going from left-to-right in the photo above.

GTPLAYER Gaming Chair – I bought it 2 years ago this month when it was obvious I'd be working from home a lot more than I had been thanks to the COVID-19 pandemic and I needed a decent office chair. It's alright. Not super comfortable, but it does promote good posture and is the best home office chair I've had so far. It also reclines and has a leg rest, but I don't use those features nearly as much as I thought I would. I eventually want to get something that gives off a more professional vibe (I'm not a gamer, Twitch streamer, or YouTuber) and is more comfortable.

IKEA Tables – Two cheap tables arranged in an L shape, so not a desk in the true sense of the word. I really wish I had something with drawers to hide knicknacks like SD cards, thumb drives, dongles, earbuds, etc. when I'm not using them.

EleTab Standing Desk – that's the thing the monitor, keyboard, mouse, and KVM switch are sitting on. I can raise it up with the help of hydraulics. Nothing too fancy. No motors or anything. But it does the job and was lots cheaper than a “regular” standing desk.

Logitech Wireless Keyboard & Mouse – I got these for free from a relative who didn't want them anymore, so I can't really complain. Nothing fancy, but they work well. They take standard AA and AAA batteries and last a crazy long time.

Dell 22” Monitor – Another freebie from a relative. Nicest of the monitors I currently own. About a year ago I adopted a single-monitor workflow so one monitor is all I need. If you think that's crazy or just want to know more about that, I plan on writing about it in a future post.

Aukey 1080p Webcam – Purchased in the Spring of 2020 this was an early pandemic acquisition when webcams were hard to find because everyone was suddenly working from home. The nice Logitech webcams were stupid expensive at the time. I found this one at a reasonable price and took a chance. It's not terrible.

PWAY KVM Switch – (on the standing desk between monitor and laptop) This allows me to connect my work laptop and personal desktop to the monitor, keyboard, and mouse and toggle between them by pressing a button on the switch. This particular switch is USB powered and requires no external power. It supposedly supports monitors up to 4K resolution (I haven't tested that). It works well and reduces a lot of desk clutter.

Dell XPS 15 9500 Laptop – this is my work laptop. I try to be careful not to introduce more potential attack vectors than necessary to protect the data of the company and our customers, so the only thing I use it for personal-wise is web browsing. Everything else I do on it is work-related.

Non-Branded Dual Vertical Laptop Stand – Made of metal and quite sturdy, this allows me to stand up to two laptops vertically on my desk, saving oodles of space. I have my work laptop configured to remain on when the lid is closed. I put it in the stand front-down so the back is up and has plenty of air-flow when the fan spins up. This doodad and the KVM switch are the biggest space-savers in my setup.

Panasonic Cordless Landline Phone – I hadn't had a true landline phone in many years. Then, there was a severe wind storm in my area in September 2020 that knocked out power for extended periods of time over several days. During these outages, not only was the internet down, but cell phone service was also down or unreliable at best. We had no way of getting in contact with anyone unless we drove to an area with cell phone service. I remembered that traditional landline phones don't require external power and still function in the event of a power outage, so I got a landline once again. We have the cordless phones for convenience, but we also have a couple corded phones if the power goes out. When I'm at home, I have my cell phone forward calls to my landline. The service is stupid expensive ($70/month for a single line including national long distance) but it works great and is one more option in an emergency.

HP Z220 Workstation Desktop – It's old, but it works well and is my primary personal computer at the moment. I gave my ThinkPad T460 to my son at the end of the school year in May when he had to turn in his school laptop for the Summer.

Sabrent USB 3 Dual SATA Drive Dock + 1TB SSD – (Out of frame behind the desktop) When I want to use Linux, I currently boot Pop!_OS on my desktop from the SSD via this dock. It works surprisingly well and means I don't have to mess with dual-boot partition configs on a single drive that always seem to break. Each OS has its own drive and that's just fine with me.

So there it is. I'll use this nifty setup for a while and will inevitably get tired of it, at which time I'll reconfigure everything again.

I'm thinking about acquiring a laptop and repurposing my desktop as a home server, but that may have to wait until after the holidays.

This is a transcript of an excerpt from a Facebook Live Event for Youth and Single Adults in the Africa South Area of The Church of Jesus Christ of Latter-day Saints, with Elder Ronald A. Rasband of the Quorum of the Twelve Apostles, held on November 16th, 2021. The full video of the event can be viewed here or here.

Moderator: So, many of our young people really have been profoundly affected by COVID-19, and our first question is one that's been echoed probably across many continents and it's around the COVID-19 vaccine. This is what our young person wrote, they said:

Many high-profile leaders in Africa have spoken out against being vaccinated. This leaves us in a confusing space. What is your advice to those who wonder if they should be vaccinated against COVID-19?